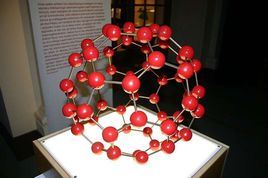 As a prominent representative of the fullerene family, the C60 molecule is a spherical 32-faced body formed by connecting 60 carbon atoms with 20 six-membered rings and 12 five-membered rings. It is very close to the structure of football, and its unique structure and singular properties. Concerned by scientists from various countries.

Fullerenes are poorly soluble in most solvents and are usually dissolved in an aromatic solvent such as toluene, chlorobenzene, or a non-aromatic solvent, carbon disulfide. The solution of pure fullerene is usually purple, and the concentration is purple.

So far, C60's unique molecular structure and physicochemical properties have made fullerenes show attractive applications in many fields such as optoelectronics, mechanics, superconductivity, biomedicine, and catalysis. Fullerenes have become a class of preparations. New carbon nanomaterials of concern.