Arsenic (As) is a nitrogen group element in the fourth period of the periodic table of chemical elements. Arsenic is a non - metallic element widely distributed in nature. The most common arsenic-bearing ores are realgar and ortolium, others including arsenite nickel, arsenite pyrite, and the rare arsenite cobalt.

Arsenic has three allotropes: gray, black and yellow, but only gray arsenic has important industrial uses. Gray arsenic is also the most common elemental form, brittle and hard, with a metallic luster. Arsenic reacts easily with fluorine and oxygen and can react with most metals and nonmetals under heating conditions. It is insoluble in water, but soluble in nitric acid, aqua regia and strong alkali. Arsenic in hot concentrated nitric acid will be oxidized by nitric acid to arsenic acid and release nitric oxide. 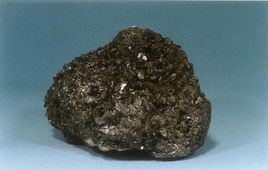 The common valence states of arsenic are +3 and +5. When arsenic trioxide and carbon powder were heated together, the reduced arsenic substance could be seen on the wall of the test tube. In addition, heating the second order stannous chloride and the third order arsenic trichloride can also reduce the arsenic substance. Arsenic has another special property: it melts at 817 ° c. But when it's heated to 615 degrees Celsius, arsenic sublimates directly from solid to gas, much like iodine.

Arsenic burns in the air to produce a pink flame and white smoke - "arsenic trioxide". When arsenic trioxide is mixed with potassium iodide and hydrochloric acid, you get the orange-red crystal of arsenic triiodide. Before the 20th century, it was widely used in the analytical chemical and pharmaceutical industries.An interesting dye, "scheele green", is a green substance called copper arsenite mixed potassium arsenite and copper sulphate. The dye was cheap and fast, leading to a pigment revolution in painting.

However, the substance decomposes in moist conditions and volatilizes the arsenic vapor. The most famous of his victims is probably Napoleon, whose body was found to have 100 times the arsenic level at autopsy. The reason is that the murals, wallpaper, and even curtains in the rooms where he ended up were painted with scheele green. Another dangerous dye, Paris green, also popular at the time, was a highly toxic arsenic compound, copper arsenite acetate.

Arsenic is toxic, as well as its compound arsenic trioxide is one of the oldest poisons. It is odorless and tasteless, appearance as white frost powder, commonly known as arsenic.Now, with the increase of people's health and environmental awareness, the application of arsenic and its compounds in pigments, pesticides, wood treatment, herbicides and other aspects has been gradually replaced by environmentally friendly and non-toxic products.

The application of arsenic is mainly concentrated in alloy, semiconductor, medicine and other fields. Adding 0.15%-0.5% arsenic in copper to make arsenic-copper alloy can significantly reduce the thermal conductivity and electrical conductivity of copper and improve the processing plasticity of oxygen-containing copper. It’s commonly used in the production of train combustion chamber support screw and high temperature reduction atmosphere parts.

When the semiconductor material silicon is doped with arsenic, it becomes n-type semiconductor. These materials are widely used in the manufacture of diodes, light-emitting diodes and lasers.Arsenic has physiological and pharmacological effects and is widely used in medical and health fields. Studies have shown that some traditional Chinese medicines containing arsenic can not only prefabricate tumor tissue growth, but also have the role of disease-resistant microorganisms and antimalarial.