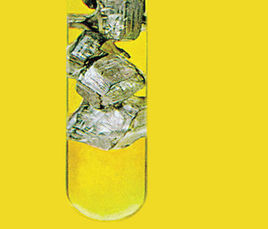 Lithium is a silvery white metal that is very light and has a density of 0.534 grams per cubic centimeter and is the lightest of all metals. Lithium is used in the metallurgical industry. Adding a small amount of lithium (five hundredths of a million) to copper can greatly improve the performance of copper: this is because lithium has active chemical properties and can react with harmful impurities such as oxygen, nitrogen, sulfur, etc. The role of the agent. Adding a small amount of lithium to aluminum, magnesium and other metals can improve their robustness and acid and alkali resistance.

The metallic lithium characteristic is only one-fifth of the weight of the same volume of aluminum and one-half of the water. Lithium can not only float on the water, but even float on kerosene. If a plane is made of lithium, two people can lift it!